A season to remember for the players of the 5thXI, ending on a high taking home the prized ‘K’ Grade Shield.

Both semi-final and grand-final exhibitions displayed outstanding individual performances along with key partnerships. 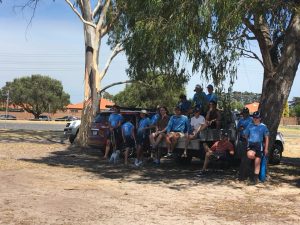 Skipper Justin Brown won the toss and elected to bowl looking to dismantle the boys of Chelsea Heights. With play eventually beginning after a delayed start, it didn’t take long for wickets to unfold with Connor Brown ripping through the opener 3rd ball of the game. From there, CHAG lost what little momentum they had, and wickets began to fall like flies. Justin and Rob Williams finished respectively with 3/16 off 8and 3/8 off 7. A cheeky 2/8 off 2 from Adrian Shannon late in the innings secured the last wickets, with CHAG being all out for 71.

From the start runs were no issue with Brian Fallon and Troy Smith putting on a key partnership of 45 runs. Both were unable to make it through not out, but their respective scores of 30 and 22 were enough for Connor to come in at the end and hit the winning run with ease.

Another great start with a win of the toss and decision to bowl. Once again, an early wicket had the opposition on alert due to a magnificent run out effort from Troy. Not much action for a while with the new pair of batters knuckling down, until Rob had one plumb in front. This wicket was somewhat the catalyst to start a 9/38 collapse seen from Le Page, ending their short innings on 83. Justin starred with the ball with a little help from Adrian and Rob, respectively finishing with figures of 5/22 off 8, 2/5 off 3 and 2/19 off 7.

Even with the loss of his partner early in the innings, Jack Filimaua was looking comfortable in the middle, yet was forced to retire due to heat exhaustion. He finished on a well-rounded 19* and laid the foundations for Garry Seignior and Adrian to come in and steer the ship home with respective scores of 27* and 16*. 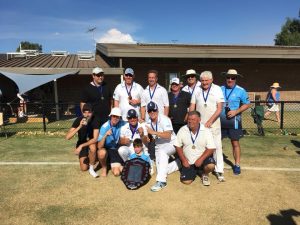 Overall the spectator support was extraordinary and speaks volumes of the club’s values as we continue to strive for success in the near future.

A massive thanks is also in order for all who contributed throughout the week, whether by running the bar, cooking the snags, scoring, etc.

Congratulation’s players of the 5XI!